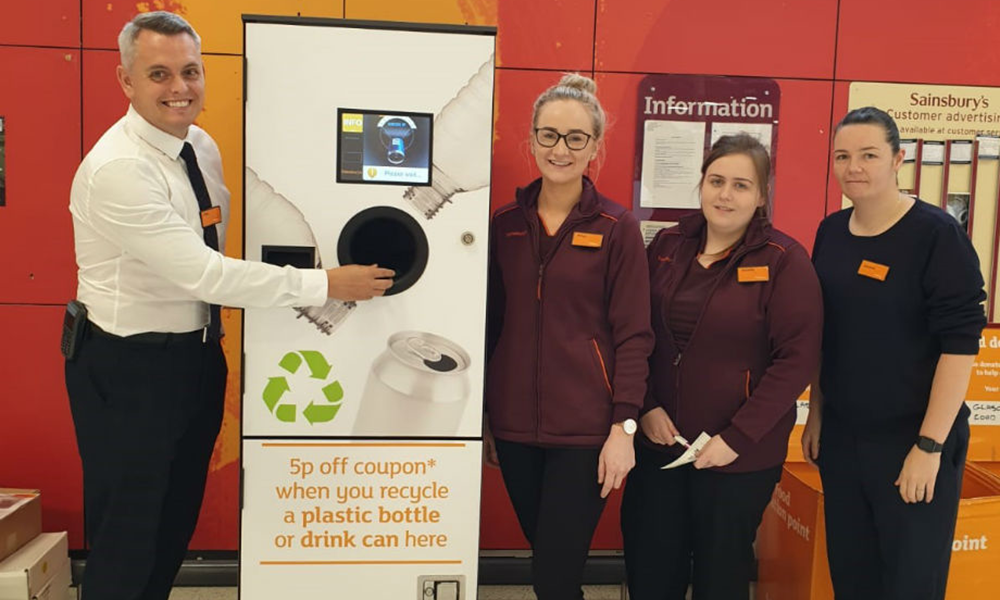 The trial allows customers to return plastic bottles and drinks cans in exchange for money off their shopping.

Braehead has become the first Sainsbury’s store in Scotland, and only the third in the UK, to offer this service to customers.

From today, customers can deposit plastic bottles of any size up to 3 litres and aluminium drinks cans in a machine at the store entrance, in exchange for a coupon that’s worth 5p per item towards their shopping.

Up to 500 items can be deposited per visit, which means customers could save up to £25.

Judith Batchelar, Director of Sainsbury’s Brand said: “We’re delighted to offer a new way to help our customers recycle while saving on their shop.”

The reverse vending recycling trial is the latest in a line of steps Sainsbury’s is taking as part of its drive to cut plastic by removing, reusing, replacing and recycling, and launched last month at stores in Lincoln and Hull.

Sainsbury’s also recently announced it was the first UK supermarket to remove plastic bags for loose fruit, vegetables and bakery items from all stores, offering paper and re-usable bags made from recycled materials.

The company also recently updated on its progress with removing and replacing plastic packaging, which totals over 10,000 tonnes this year.

The trial has been launched against a backdrop of government action on establishing deposit return schemes (DRS) for drinks containers.

Defra is currently consulting on a DRS for single-use drinks containers as a part of its Resources and Waste Strategy.

It says it is pursuing an evidence-led approach to build an economic assessment of a DRS for England.

The Scottish government recently announced that its own country-wide DRS will include aluminium and steel cans as well as drinks containers made of glass and Polyethylene terephthalate (PET) plastic.

It says the deposit price will be 20p, which customers will be able to get back when they return the container to a bring back point.

On Scotland’s DRS, Jill Farrell, chief operating officer for Zero Waste Scotland, said: “This will be a game-changer for recycling and the circular economy in Scotland. By giving people an extra incentive to do something good for our environment, and having a consistent approach across Scotland, we are confident it will be easier for all of us to do the right thing. This will improve the volume and quality of recycling and help tackle litter in the process.

“With a huge network of places to return your bottles and cans, it will be just as easy to return a drink as it is to buy one in the first place. I’m proud of Zero Waste Scotland’s role in advising the Scottish Government on this design, which has resulted in a blueprint for a world-class scheme.”