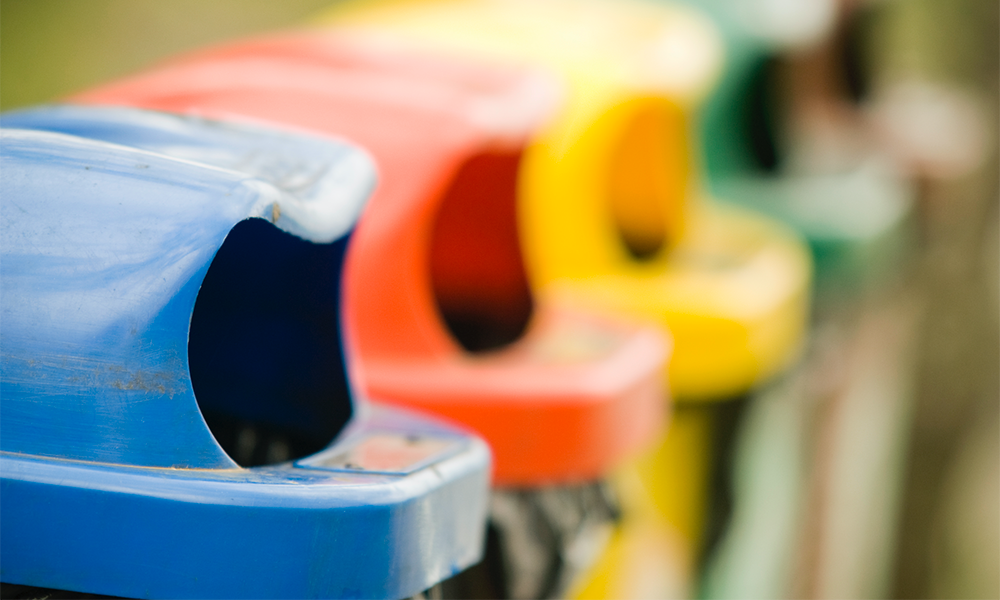 Changing the colour of bins makes a difference when it comes to increasing “on-the-go” recycling in public spaces, according to the lessons learnt from #LeedsByExample.

The pioneering #LeedsByExample project was launched in October 2018 by environmental charity Hubbub and Ecosurety.

As the UK’s biggest collaborative push to improve on-the-go recycling, it introduced 186 new recycling points and new technology in the square mile of Leeds City centre.

The purpose of the pilot was to test the impact of new bin designs, bin locations and communications over the course of a year.

The trial found that simply changing the colour and messaging of the bins had a significant impact on the amount of recycling collected.

Lessons learned from #LeedsByExample will be used to ensure success of new on-the-go recycling schemes across the country.

Of the 1.2 million coffee cups recycled, over 9% were from on-street bins, 39% from managed locations such as workplaces and universities and over 50% from retailers.

Contamination was also tackled through clear messaging such as ‘Empty plastic and cans, nowt else’ and consistent colour coding, resulting in contamination rates of 39%, significantly below the national average of 51%.

It was also found that the quality of recycling reduced during holiday or leisure periods when footfall rises, due to more people in the city centre who are not ‘regulars’.

Gavin Ellis, Co-founder and Director of Hubbub said: “We have learned a huge amount from this trial and would like to thank the people of Leeds and our partners for their support.

“The information we’ve gathered will inform many similar programmes in the future and we hope this will have a huge impact on recycling on-the-go levels across the UK. The city is now leading by example when it comes to recycling.”

35 litter bins were reskinned as recycling bins which immediately increased target material in them from 42% to 57%.

Older reskinned bins with a wide aperture collected the most target material but had 30% contamination.

The public responded to visual cues like icons and aperture shape. Changing to a circular aperture helped reduce contamination to around 17% from 30% in reskinned bins.

The most noticed element of the campaign was the yellow plastic/can recycling bins (70%), followed by the orange bins (47%) demonstrating the value of brightly coloured infrastructure with clear, distinctive messaging.

“The trial showed that the public respond to playfulness, bold messaging and interventions that visualise the issue and make recycling fun,” the report states.

Although the one year pilot has come to an end, the project will continue as Leeds City Council have taken over the waste collections and will continue to work with local partner – to monitor the scheme.

They are keen to increase the number of recycling points and build on the what has been learnt to date.

Cllr Al Garthwaite, Deputy Executive Member for Environment and Active Lifestyles said “The huge success of this groundbreaking initiative shows that not only is Leeds city centre growing and thriving, but that busy Leeds people are really keen to help the city respond to the climate emergency by doing their bit.

The on-the-go recycling campaign has since rolled out in Swansea and Edinburgh under the #InTheLoop name and are due to run until spring 2020.

The collective findings from all three locations will then help form an inspiration guide to help other towns and cities implement effective recycling on-the-go.

The 12-month #LeedsByExample impact report follows on from the launch last week of the Ecosurety Exploration Fund, a new initiative that is seeking to fund projects like #LeedsByExample that can reduce the impact of packaging, batteries or e-waste on the environment through innovation or research.

James Piper, CEO of Ecosurety, commented: “One year on from the launch of #LeedsByExample and we are thrilled to see the number of key insights that have been gained which will help to increase the amount of recycling on-the-go across the UK.

“This pioneering project was a first for cross-industry collaboration and it has certainly delivered results which will go on to reap benefits well into the future.”