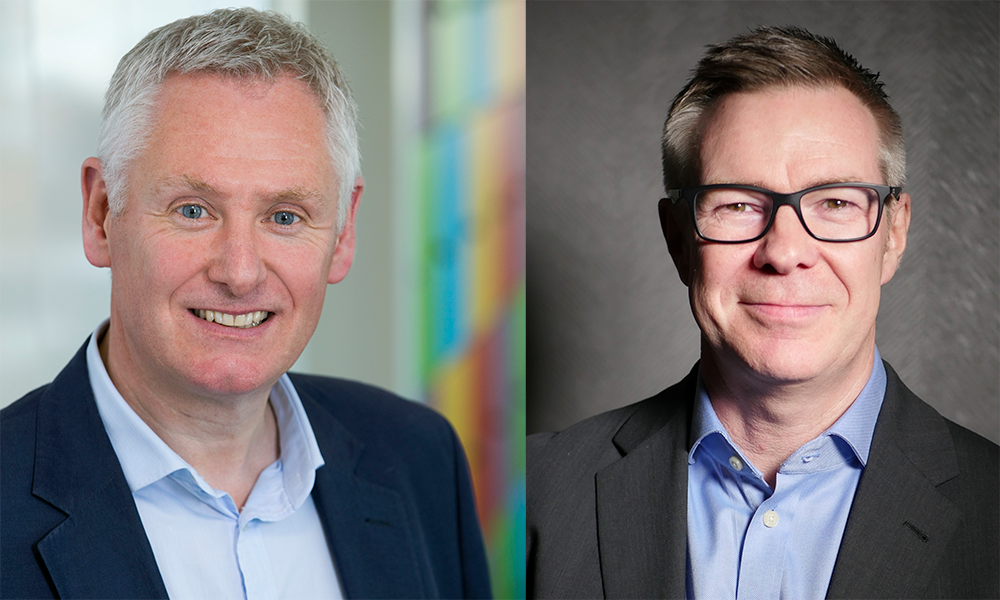 The appointment, which takes effect from 01 January 2020, is part of the restructure of the global SUEZ group’s executive committee following Bertrand Camus’ promotion to Group Chief Executive Officer in May 2019.

John Scanlon (right), who has been Chief Operations Officer for SUEZ in the UK for the past four years, steps up to Chief Executive Officer of SUEZ recycling and recovery UK on 01 January 2020.

The promotions of both David Palmer-Jones and John Scanlon to their new Northern European and UK leadership positions respectively within SUEZ recycling and recovery, ensures a continuity of leadership at the heart of the SUEZ group, which is set for further growth as the region transitions towards a circular-economy in resources.

SUEZ’s recycling and recovery division has showed robust revenue growth both at a UK and European level. (1)

David is an established industry leader with a 30-year career within the European waste, recycling and resources sector, all served at SUEZ since joining in 1989 to set up the group’s UK operations.

David has held a number of leadership roles within the wider recycling and resources sector in addition to his SUEZ executive positions. David is currently the Chair of the UK Resources Council. From 2014 to 2017 he was President of FEAD (the European Federation of Waste Management and Environmental Services); from 2009 to 2016 he was non-executive Director/Trustee of WRAP (Waste and Resources Action Plan) and from 2012 to 2014 he was Chairman of the ESA (Environmental Services Association).

During his tenure as CEO of SUEZ in the UK, David has played a major role in helping to shape policy and best practice in the recycling and waste management industry. David’s leadership as Chair of FEAD helped shape EU policy to form the terms of a European Commission’s Circular Economy Package, and in the UK, David has been a figurehead in framing the recent debates preceding DEFRA’s publication of the Resources and Waste Strategy for England. He was also instrumental in negotiating a new Code of Practice with DEFRA in 2013 for all materials recycling facilities in the UK.

In addition to this, David has led a joint industry and political initiative to tackle waste crime; and has been instrumental in overseeing the delivery of billions of pounds of new energy-from-waste infrastructure, reducing the UK’s reliance on landfill and helping to promote a circular economy for materials.

John’s industrial leadership and strategic vision has been forged over his 28-year career with SUEZ, since joining in 1991 as one of the company’s first employees in the UK.

As Chief Executive Officer of SUEZ recycling and recovery UK, John will be responsible for driving forward the SUEZ group’s recently announced SUEZ 2030 vision in the UK and for continuing to mobilise SUEZ’s newly won contracts in Greater Manchester and Somerset.

With a background in chemistry, John has held a variety of operational and business development roles within SUEZ.

He was heavily involved with the first PFI contract that SUEZ won in Surrey in 1997.  He went on to be the General Manager for that contract in 2000. John was closely involved in the development of SUEZ’s first EfW facilities.

As well as being responsible for the operation of the company’s circa 300 facilities in the UK and 4,600 staff who work across SUEZ’s local authority, processing and industrial and commercial contracts, John has been responsible for driving a lean culture in operations.